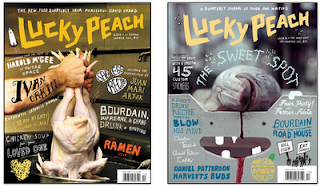 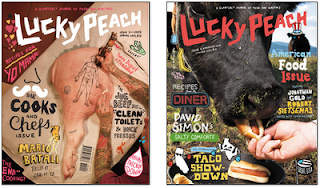 Some months back, before leaving for a quick holiday, I was looking for some juicy reading material for the long train ride home. Issue one of McSweeney's Lucky Peach magazine had just been released, and I picked it up after hearing some buzz about it at work. Excited to see that it was all about ramen, I didn't even crack the spine until I boarded for home. With the hypnotic hum of the rails under me, mid-read I was wishing I was on the bullet train en route to the famous ramen restaurants being described. It was a crash course in the art of the perfect bowl of noodley goodness. All the restaurants, of course, believe they have that special something which makes their ramen superior to the rest.

Editors David Chang and Peter Meehan were hilarious in their escapades, and the other contributors had equally entertaining tales, some of which were delectable and others repulsive, such as the story about a restaurant that served a pig's fetus in a hot bowl of broth. I loved Todd Kliman's “Debunking the Myth of Authenticity,” which asks the question, what does "authentic" really mean when it comes to cultural fare, with so many lacklustre fusion restaurants and chefs "borrowing" from various cultures’ peasant food, then turning around and charging exorbitant amounts for it in their high-end restaurants? Is it really still authentic?

Lucky Peach was chock full of wit and humor, and filled with recipes I was definitely going to try out at home. It's rare for me to actually read a magazine in full, cover to cover, looking at every picture and random drawing. It's times like that when you know something's really good. By the end of my trip I knew two things:

It was shortly after issue two's release that I heard Chang was in Toronto and he was building our very own Momofuku restaurant scheduled to open in August. I put it on my "things to do this summer" list. I checked it off last week when a friend took me for dinner on a visit to the city. Although I didn't get a peek at Chang, I did have my own "Momo" ramen and shiitake buns. 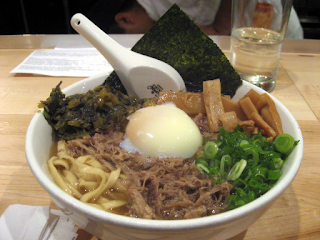 The wait was worth it, just like each issue of Lucky Peach. 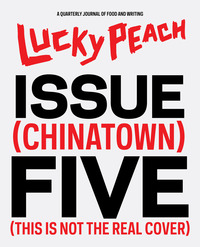 
Posted by Bookshelf Blogs at 6:51 AM