A Book Club of One (Thousand and One) 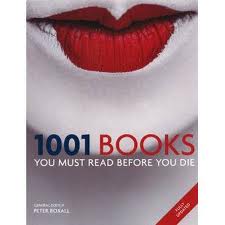 In case you haven't had the opportunity to peruse this sizable tome (the book itself is just shy of 1,000 pages long), you should know that its selections run the gamut from The Iliad to Bridget Jones's Diary, from Tolstoy to Stephen King. Each book has been chosen by a different person, and the resulting list is wonderfully eclectic, if a little bizarre at times. You can find an older version of the list on Listology.

I've been a member of this club since the year of the book's first publication, and my reading has been almost completely dictated by its suggestions (one really can't get through 1001 books before one dies if a certain cultish devotion isn't maintained.) To be fair, my four years as a student of English lit gave me a bit of an advantage, since I'd already read all of the Austen novels, and I had a pretty good jump on James, Eliot, and Dickens, too, due to an ongoing fascination with the late nineteenth century. Still, despite my scholarly experiences, I hadn't read the lion's share of the list, and I certainly had my work cut out for me where the twentieth century literature was concerned.

I should mention that, despite my best intentions, I had to abandon the ancient Greeks and Romans early on because I was already feeling overwhelmed by the epic style within the first five pages. I also found some of the books on the list so tedious that I started them but couldn't finish them. Surprisingly, these frustrating books weren't necessarily long or difficult, they were just irritating to me. Books that got kicked to the curb included: Everything is Illuminated by Jonathan Safran Foer, The Corrections by Jonathan Franzen, The Feast of the Goat by Mario Vargas Llosa, Fugitive Pieces by Anne Michaels, and Birdsong by Sebastian Faulks. Now I'm sure there are some very good people with some very good reasons why I should have soldiered on through these particular works, but there were time constraints and my own sanity to consider.

Having admitted my limitations, I will say that I have read several books that I liked well enough, many books that I read that were a complete waste of my time, and some books that were mind-blowingly great.  But that, as they say, is a blog for another day....

Posted by Bookshelf Blogs at 7:35 AM