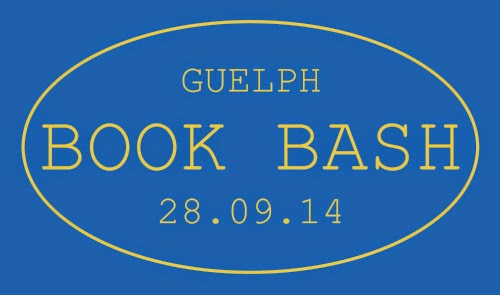 This Sunday at 8pm, Vocamus Press will be holding their annual Book Bash in the eBar, a chance to celebrate, meet, and learn more about the literary community of Guelph. Book Bash 2014 will also be the launch event for The Rhapsody Anthology 2014, the annual collection of Guelph poetry and very short prose that Vocamus Press is publishing to increase public awareness of our authors.

The evening will include performances by local spoken word artists and music by Mo’ Kauffey and by The Rolling Blackouts. Former Bookshelfer and host of CFRUs Book's For Breakfast (B4B) Dan Evans will host the bash. Dan and Vocamus co-founder Jeremy Luke Hill pumped each other up with a back-and-forth over email.

DAN EVANS You and the Vocamus team have programmed a little literary festival in September. Many would see this as the territory of the Eden Mills Festival. Are you going for the same crowd, or are you counter programming to that larger, more CanLit festival?


And, also: Book Bash offers audiences a taste of the homegrown literature that is for the most part otherwise hidden. Are you hoping that this event introduces readers to new authors, or is this more a celebration for the writers and their ilk? Isn't there a tension in programming a books- and reading-based social event for readers?

We do hope to introduce local readers to new authors, of course, but we also hope to introduce authors to other authors, readers to other readers, authors to their readers, authors to publishers, publishers to readers, and so forth. We believe that a robust literary community or literary public is comprised of readers and writers and publishers of all kinds.  We're trying to make those elements aware of each other so that they can push each other to read, write, and publish better.

As a counter question - truthfully - what did you think when I first sat down on B4B and described our project? It seemed nebulous even to me at the time (it still does in some ways), and I often wondered what impression our first fumbles at self-definition made on people.

DE You have a nice speaking voice. There's a bit of gravel to its texture. (Is sonic texture called "Timbre"?) When you first joined me in studio on a Thursday morning Books for Breakfast broadcast, I thought: Neat dude. I bought into your promise of literary industry; I wholly expected to see the fruits of your musings, both in books built and distributed, and community gathered around the web portal. I believe in you, man.

I also thought: I don't really want to read many of those books you're describing. I was interested to tour through the titles you'd published, and to sip at the bios of the authors you were supporting, but it was a pretty slim roster at that time (I think it was your own book; your mother-in-law's poems; and one of John's books...?). I'm not proud of that voice, but that's me aiming for a "true" snapshot of what I thought. You also lost me a bit with the technical details of your layout software.

Keep in mind, I comfortably label myself a book nerd. And not with the cool parts of nerdery. It's amazing to rally a gaggle of like-acting people around any activity. I commend a bunch of fiction writers in a terrestrial room, over booze and snacks, for coming together to be at least slightly vulnerable with one another. Seeking the vulnerable moment of asking for honest feedback, and mining it for useable advice. You run with a brave set. No wonder books get made.

The allure of writing for me is the quiet, lonely epiphany of creation that offers answers to general confusion. When I'm with other people, I'm distracted from my own strange flow of questions and worry. But I don't think I could be a full-time writer, because, though I fantasize about it, I've never accepted how hard it is to be alone for long periods of time with those worries and questions.

How do you do manage?

JLH I'm really amused by the account of your reaction, and I think it's how many people react -- 1) cool idea, 2) not so sure about your catalogue yet, 3) please don't try to explain that whole LaTeX deal. We're working on number two, and I'm learning not to bring number three up in the first place.

The contrast you're describing between the solitary act of writing and the communal act of writerly conversation is an important one I think, and I would add to it a third category as well, the taking on of a public writerly persona. I find that managing these different roles is a major hurdle for many writers. Some occupy the persona very well -- they read interestingly in public, relate well to readers, and so forth, but really struggle to do the work of writing, even if they have some talent there. Some are by nature more solitary -- they are disciplined writers, often quite productive, but find speaking in public frightening and talking with readers uncomfortable. The transition between solitary writer and public author is one that many people find difficult.

This is why I think writerly conversation is so important (though it can also be difficult for the reasons that you mention). Ongoing conversation with a community provides resources for writers both to write and to engage the public better. So John can (and often does) offer me advice on a particular passage I've written or on my writing process in general (though I often ignore him), while Valerie can (and did) offer to help me with the performance aspects of my reading (which I confess are deeply lacking). This kind of community takes vulnerability -- a willingness to speak truthfully and a determination not to be offended -- but I think the benefits are very much worth the effort.

Your last comment, about being alone with difficult questions, touches on the reason that I think writing (and other arts also) are so important (more so perhaps than ever), because in a culture that is increasingly dominated by technologies that demand our time and our attention, there is less and less time for quiet and solitude and reflection on any questions, never mind the difficult ones. To the extent that the creation and enjoyment of art forces us to make space for this kind of reflection, the artist plays a vital role in keeping us human, coming to occupy almost alone the role that also used to be played by the priest and the elder.

This is my complaint with much contemporary literature, that it does not seem to come out of serious and sustained reflection, out of real wresting with the problem of being human.  It is not moral in the sense that John Gardner talks about "moral fiction", as a kind of writing that never lets go of the questions troubling the human experience.

I could get way more philosophical here, but I won't, because the format of the conversation doesn't have the space for it, but it leads me to a question I want to ask of you -- As someone with experience in a range of bookish roles (The Bookshelf, PS Guelph, Books for Breakfast), how do you see the cultural role of books developing, and how could we at Vocamus contribute to that role best in a local context?

DE Thanks for your generous answers. It's late on a Sunday, and I've been procrastinating with my answer because you've softly sucker-punched me. (Sucker-nudged?) I'm feeling cautious. These are the moments I retreat into style, so permit me to introduce (or forgive me for doing it) headers:

Public Writerly Persona
This is good. Thanks for bringing this up. Writerly Persona is tough because it can be the thing that alienates a reader. Inasmuch as a reader is a non-writer. The writerly persona can come off as attractive, but also pompous, and condescending. Maybe part of your role through the Vocamus community is to work on helping create a readerly persona in prospective readers. The total protein of a literary community must rely as much on readership (the rice, if you will) as it does on writers (the beans, no doubt).

And so maybe Vocamus is a laboratory and a workshop for the development of a healthy Writerly Persona in its members.

Performance Aspects
A good literary reading is rare. A good book launch is less rare, and there are things that can be done to make a launch exciting and nourishing, even if the reading is poor, or mediocre. Forms of interactivity with the audience like moderated Q&As, or facilitated conversations. Game show stuff. A small crowd gathers for various reasons to honour a book's existence, and the stage is perfectly set to introduce the readers to one another, in order that they might share, criticize, negate, argue, and enthuse collectively.

Literary readings could stop aspiring to affect audiences the way cinema does. No need for post-event introspection. The lighting isn't as low at a reading, and there's beer instead of popcorn and skittles.

Determination not to be offended
I'm with you. The skin thickened against editorial suggestion. A good tool for all artists. And at the same time, I feel like "being offended" is the perfect state for the artist to exist within. It might just drive a writer back to the keyboard, to attack that moral question you're rightly pointing to. I think offense is one of the rich conditions for an artist when it comes to serious reflection about the human experience.

The Cultural Role of Books
Geez. This is the sucker-nudge, right here.

What can I say? I want people to have access to the wildness, the mind-expansion, the language blooms, the strangeness, the affirmation and the permission that I've been privileged enough to experience through books and stories. I still believe in the book ("the codex", whatever,) as an inspiring and effective information technology. Books can be so good with mood, voices, safe quandaries, and salvos (among so many other things); and they are such pleasures to the senses, on top. (I smell books, and hear them, besides touching and seeing them.)

You Vocamus folks are waving a bright flag, and peeing in the appropriate corners -- I'd say you're already doing the job you should do: rally the troops; sharpen the skates; unpurple the prose; and engage the masses... one thoughtful book, one inclusive event, one true engagement at a time.
Posted by Bookshelf Blogs at 5:25 PM