THE CHEAPENING OF THE COMICS 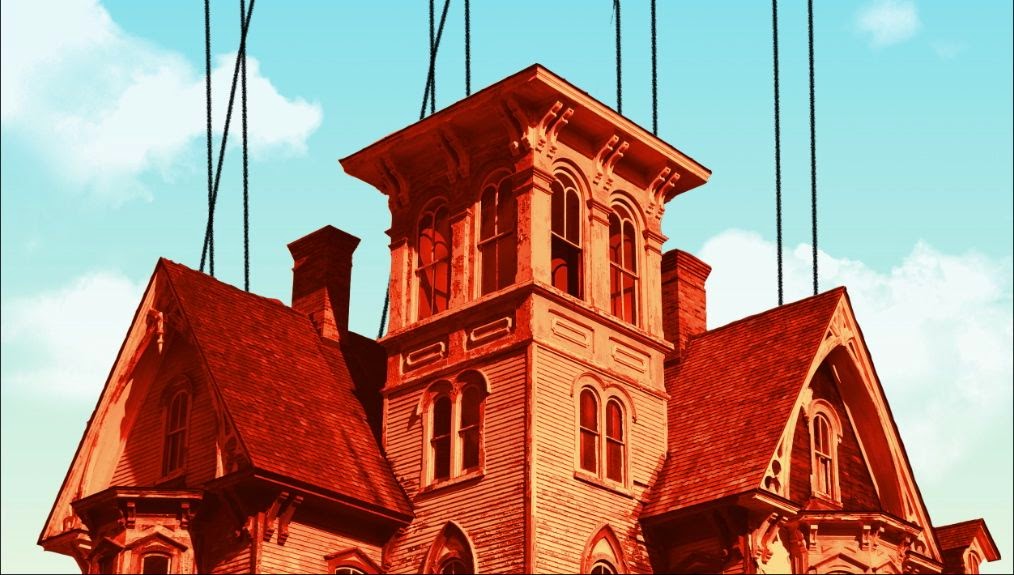 For such a beloved guy, we don't have much of Calvin and Hobbes creator Bill Watterson. Because he doesn't wave from Calvin floats in parades, or do convention signings next to cardboard cut-outs of Hobbes, the guy's been dubbed a recluse. Thomas Pynchon, a fella equipped with Watterson's dual interest in and suspicion of the world--albeit peeped at through a very different lens--famously balked at the mantle of reclusiveness, believing that "'recluse' is a code word generated by journalists, meaning Doesn't like to talk to reporters.'" So we're not flush with details of Watterson's life and thanks to his disinterest in butt-sized loads of money, we don't have Calvin and Hobbes-shaped vitamins--or lunch boxes or bed sheets or prophylactics--to help us better internalize those characters we love. All we have is the work Watterson did. Work that is, according to comic artist Wendy Ashbubble in Lee Henderson's new novel, "on a whole other level of goodness."
Watterson has, however, stepped out from behind his strip to share his unfiltered thoughts and feelings on a few occasions. In October 1988, Watterson delivered a speech at the Festival of Cartoon Art at Ohio State University. In the address, titled "The Cheapening of the Comics," Watterson extols the virtues of his favourite strips--Peanuts, Pogo, and Krazy Kat. "These three strips showed me the incredible possibilities of the cartoon medium, and I continue to find them inspiring," he says. "These strips are just three of my personal favorites, but they give us some idea of how good comics can be. They argue powerfully that comics can be vehicles for beautiful artwork and serious, intelligent expression."

In his address, Watterson doesn't mention any contemporary cartoons. No Garfield, or Doonesbury, or Cathy, or Bloom County--some of the most popular strips at the time. "Amazingly," he says, "much of the best cartoon work was done early on in the medium's history." In the alternate reality that The Road Narrows As You Go takes place in, I wonder if Watterson would have also not mentioned Wendy Ashbubble's daily strip Strays.

Watterson pops up a few times in The Road Narrows as You Go, along with the likes of Art Speigleman, Charles "Sparky" Schultz, and various other comics heavies; briefly he's drawn into orbit around No Manors, "a five-storey art deco flophouse" that stands out amongst the other "punk squats, hippie communes, and satanic covens in the Bay Area." The book opens with the passing of Hick Elmdale, No Manor's primary resident and notorious ghost artist for Walt Disney strips and all around respected cornerstone of West Coast comics. "Two paid rent at No Manors," recalls the We that narrates, "both comic strip artists. One was dead, and the other was not home. No one knew where to find Wendy Ashbubble. The name wasn't familiar to us, and neither was her comic strip, Strays, but this is her story."

Maybe sired by Ronald Reagan, definitely raised in Victoria, Wendy reinvents herself in San Francisco, claiming to be from Cleveland. She's the creator of Strays, a daily about the animals inhabiting the vacant lot adjacent to No Manors. As Hick is passing, Wendy's meeting with her editor, Gabby Scavalda, ready to shutter her strip, which hasn't taken off like she'd like. Wendy instead inks a deal with Frank Fleecen, an up-and-coming bonds trader who's fond of her work and wants to help Strays achieve a Peanuts-like success. Strip ubiquity is achieved, of course, by getting it in as many papers and attaching it to as many products as possible.

Watterson breaks down the relationships: "The comics are a collaborative effort," he says, "on the part of the cartoonists who draw them, the syndicates that distribute them, and the newspapers that buy and publish them. Each needs the other, and all have common interest in providing comics features of a quality that attracts a devoted readership. But business and art almost always have a rocky marriage, and in comic strips today the interests of business are undermining the concerns of the art."

While about a great many things--repressed memory, Satanism, sailing stones, etc.--Henderson's follow up to the award-winning The Man Game is most consistently about that "rocky marriage." Syndicated comics make for a great lens through which to watch business and art cavort. Commercial by design and by ambition, the daily strip--at it's best--is a nuanced balance of the personal and the universal. Watterson's lauded strips struck their own wonderful balance, and I'd argue that Watterson's up there with them. Of course, he was one of the few artists working in that field that didn't subject his subject to licensing.

"There's punk-looking comics," says Biz Aziz, well-known drag queen and underground comic memoirist, about Calvin and Hobbes, "and there's punk-acting comics, and that right there is both."

"Some very good strips have been cheapened by licensing," Watterson says, getting increasingly unforgiving in his address. "Licensed products, of course, are incapable of capturing the subtleties of the original strip, and the merchandise can alter the public perception of the strip, especially when the merchandise is aimed at a younger audience than the strip is... Inevitably, extra assistants and business people are required, and having so many cooks in the kitchen usually encourages a blandness to suit all tastes. Strips that once had integrity and heart become simply cute as the business moguls cash in. Once a lot of money and jobs are riding on the status quo, it gets harder to push the experiments and new directions that keep a strip vital. Characters lose their believability as they start endorsing major companies and lend their faces to bedsheets and boxer shorts. The appealing innocence and sincerity of cartoon characters is corrupted when they use those qualities to peddle products."

Business will almost always alter art, but very rarely does art alter business. In the trickle down heyday of The Gipper's America, no corner was left unsplashed by business. Every manner of art maker passes through the front door of No Manors--under the Old Testament motto "Be not forgetful to welcome strangers, for in this way some have entertained angels unawares--all strata of cartoonists, zine makers, performance artists, fine and conceptual artists. And every bit of art can be profited from, whether it's a strip in the newspaper or rubbings of mysterious desert phenomena in a gallery and or a hard-to-find zine anthologized by a major publisher. As Strays becomes as popular as Fleecen promised--with balloons in the Macy's Thanksgiving Day Parade--as the characters become increasingly associated with products that have nothing to do with their story, Wendy likewise has less and less to do with the strip and--as Watterson predicts--she makes assistants out of a few of strays in No Manors.

"I try to give readers the best strip I'm capable of doing," says Watterson. "I look at cartoons as an art, as a form of personal expression. That's why I don't hire assistants, why I write and draw every line myself, why I draw and paint special art for each of my books, and why I refuse to dilute or corrupt the strip's message with merchandising."

Peppered throughout the novel are Strays strips (illustrated by Henderson's, whose style has improved since The Man Game) and, if we're to believe that the work is a personal expression, we can locate Wendy in the art the same way we can locate Watterson. But as Wendy's assistants--the We who narrate--exert more and more influence, it becomes harder to confidently route her out. The Road Narrows As You Go is ostensibly about Wendy Ashbubble, but if Wendy's not telling her own story, as she's not writing and drawing her own cartoon. Singular identity drips away, and what was once personal becomes public, collective and impersonal.

Calvin and Hobbes, which ran its last strip on December 31, 1995, is now considered the last great comic strip, the last in a line that includes those classics Watterson valorized. The Road Narrows As You Go documents both the heyday and the twilight of the syndicated strip. The business altered the art the point that the art became a kind of business.

What exactly The Road Narrows As You Go actually means as a title is sort of tricky. In some ways, it might suggest that the further you travel down a path, commit to decisions and relationships, the more your options dwindle--as Wendy is increasingly hemmed in by the moves she makes--making it harder to turn back. With the parameters that Watterson lays down, the choices are few once your strip gets big. You either sell out, or you sell nothing. He may look down his nose at those artists who let their work become a puppet for larger forces, but he is also one of the few artists--and certainly the last of his ilk-- who was good enough at what he did, and doing it at the right time, that he could stick to his guns.

But I also kept thinking about the traditional comic strip frame, how the action and story travels from left to right in a 2D foreground. Any path leading into the distant background--to a world beyond the day-to-day hijinks--winnows towards the vanishing point, and any character who takes that path is walking away from the static frame. And as the character moves away, the art of them becomes more basic, less detailed, until they're just an outline, until they're just a dot, until they're just undrawable.

And here's where Henderson is successful in a Watterson-type way. As Watterson did over the progression of his strip, The Road Narrows As You Go realizes its frame and manages to break out of it, escaping the flat foreground and going along with his characters down roads, into backgrounds, in the end taking away the roads all together. The characters can leap into a limitless blankness, becoming fully themselves. Like Watterson's famous final strip, Henderson ends his story with a beginning. 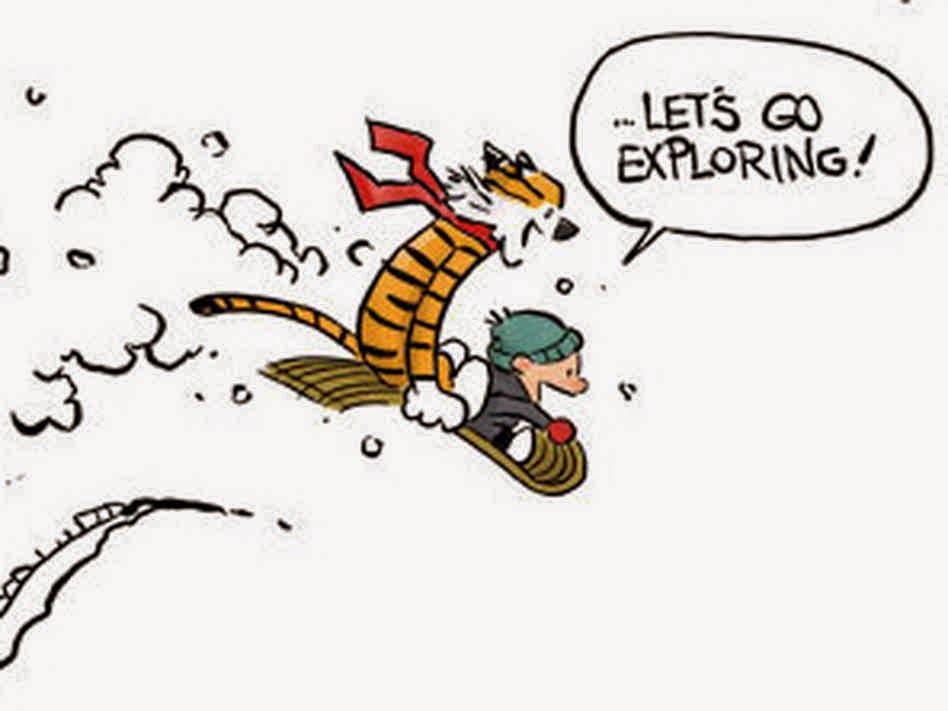 Posted by Bookshelf Blogs at 7:06 PM