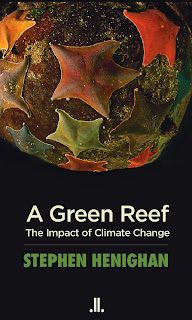 A Green Reef: The Impact of Climate Change
By Stephen Henighan

Midway through his new book A Green Reef: The Impact of Climate Change, Stephen Henighan takes us back to late 1939, early 1940, when Canadian troops were deployed to Europe. They “expected to enter a growing conflagration, but when they reached their bases in the United Kingdom they found that the Allied and Axis sides, armed and mobilized, were at war in word but not in deed.” What followed was a period of calm known as the Phony War—or der Sitzkrieg, or The Bore War. “The knowledge that death and destruction were on the horizon did not prevent many people in Europe from continuing to live as they had before.”

How we’re living now (yes, we—I’m looking at you as much as I’m looking at anyone) in relation to simmering environmental disaster leads Henighan to suggest that “we are once again in a Phony War.”

Though slight (49 pages), A Green Reef is never pithy or lacking. Henighan does not claim to try and solve the issue—or, not issue; let’s call it a reality—but does unpack it and lay out all the components—from global to personal—for assessment. This is not a scientific consideration of climate change. Flick a cigarette butt and you’ll hit one of those. Here, Henighan is looking at environmental ass-over-teakettling from the perspective of humanities. 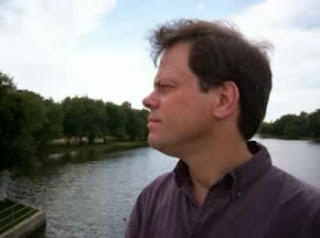 “Art is humanity in its concentrated essence,” Henighan writes. “However horrible the billions of deaths that await us may be, humanity’s most enduring loss in the long term may be that of its artistic heritage.” The value of human life and the value of art seem egrigously uneven when pitted against one another. On second blush, though, part of Henighan’s push in the book is to soberly explore a broader understanding of what encroaching anihilation would actually mean for our capital C Culture.  What happens to this “us” that we describe to ourselves when conditions either erase or condense us?

“Environment” is a tricky word. I had a friend castigate me once for referring to the Environment as though it were some Other, something separate. She explained that this is one of the biggest hurdles in inspiring any kind of change in people, to get them to stop looking at the Environment like a broken down car that needs to be fixed. A Green Reef is concerned about the whole, but is worried about the individual, and ultimately argues for the connectedness of the lot of it. The “most bracing challenge is that of reimagining outselves," Henighan writes, "our heaven, our source of meaning."

Stephen Henighan will be in the eBar Tuesday October 8th at 8pm to read from and discuss A Green Reef.
Posted by Bookshelf Blogs at 10:03 AM