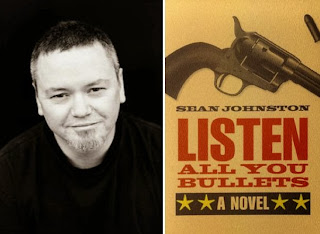 From the back of the book: "Listen All You Bullets tells the story of a young boy named Billy who is trapped on a hardscrabble North Dakota ranch with his lonely mother and wheelchair-bound father. But Billy isn't just any boy stuck on any ranch: Billy and his family are the creations of Jack Schafer's popular 1939 Western novel, Shane. Long after that novel's action has concluded and its plot and characters have seemingly solidified into popular myth, Sean Johnston sets out to explore the possibilities of a story's resistance to its own arrested afterlife."


Author of award-winning prose and poetry, co-editor of Ryga: a journal of provocations, and teacher at Okanagan College, Sean Johnston will be reading from Listen All You Bullets along with Stacey May Fowles and Sara Heinonen in the eBar
on Saturday November 2nd at 7:30pm.


The Bookshelf First off, have you always been a Westerns guy? Bullets seems just as interested in celebrating the genre as it is in subverting and complicating it.

Sean Johnston Not always, no. I’ve gone through phases, I guess. I loved cowboys, as young boy, and read Westerns then, but I just generally loved stories with heroes that were supposed to be models for young men, whether they were science fiction, western, fantasy, or whatever.

BS Why Shane? What about that particular narrative speaks to above, say, The Virginian or Riders of the Purple Sage?

SJ There are a number of reasons, such as it’s a one syllable name, it’s similar to my first name, it’s quite well-known. But the main reason is from my childhood, I think. We were taught this book in grade seven, and my family had recently moved from St. Albert, just outside of Edmonton, to an acreage a few miles from Asquith, a very small town in Saskatchewan; I was still learning my new world and my place in it—as any child that age is, I suppose, but also as someone foreign to my environment. Shane spoke to me then because I thought it was about the rural prairies, and however it was intended, it seemed to me as if it was meant to be instructive, as if the title character really was meant to be a model.

Later on I resented its hold on me, and the Western’s hold on society in general. No matter how often you’re told it’s fiction, when you’re young it becomes some kind of truth.

BS You schooled for a spell in South Dakota and hail from our prairies (and Bullets reaches across this boarder, too), do you see a commonness in these places? A commonness of myth? Landscape?

What I found was there was less in common than I thought, but was this discrepancy caused by a nostalgic rewriting of my own past or by and actual difference between Saskatchewan and the Dakotas? Who knows? It must have been both. But I do love the landscape, where you can be alone under the sky and there is nowhere to hide. 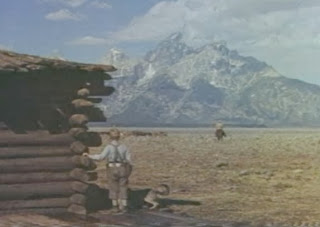 BS If on a winters night a traveler gets mentioned in the text, and mention of the character Sean Johnston's love of Leonard Cohen can't help but bring to mind Cohen's monkeying with myth in Beautiful Losers. What are some of Bullets other peers or ancestors?

SJ Donald Barthelme is one of my favourites. Maybe the favourite. Also Ondaatje, whose Coming Through Slaughter is maybe my favourite Canadian novel.

I admire writers who are deceptively simple, whose work plays in between the sentences, but whose sentences are still accessible. Grace Paley is another one that comes to mind, and a number of Atwood’s stories. 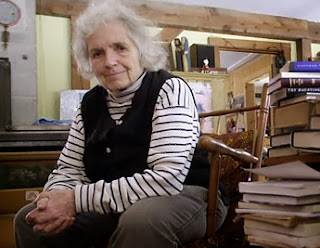 BS Where do you feel Bullets stands in relation to your other work? Is it a place you've arrived to, or a place you're heading?

SJ That’s a hard question. Every work feels, as it’s being written, as if it is the culmination of whatever’s come before. Then when I move on to the next thing it feels as if it’s simply a digression.

This novel is the product of a particularly difficult time in my life and part of its form comes from a sort of crisis of faith—I no longer believed in the efficacy of literature in general, and the novel in particular. Part of the reason it’s a novel that refuses to be a novel is a kind of child-like anger—I was angry because I felt like I’d been lied to all along.

As John Gardner wrote, in his book On Moral Fiction, “[w]hen a metaphysical system breaks down, the forms of art which supported that system no longer feel true or adequate.” But he goes on to say that there is no philosophical progress implied, that “it usually means only that the hunter has exhausted one part of the woods and has moved to a new part, or to a part exhausted earlier, to which the prey may have doubled back.”

It seemed true to me when I had just finished Listen All You Bullets, and it seems more true to me now, as I work on short fiction, and a the second draft of a new novel whose first draft corresponded roughly with the birth of my daughter. The external factors change my aesthetic somehow. I sometimes never know their effect; other times, such as with Bullets, it is pretty clear.
Posted by Bookshelf Blogs at 6:54 AM