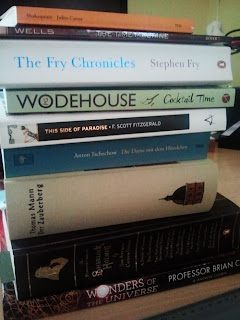 So, if you can put down your book for a second, have a look at the stacks on Naden's Tumblr, and imagine how the books that make them up describe the person that left it. And if you have an extra moment, send us a picture of your own simultaneous reads stack, or if you spot one while you're out and about, snap it and send it along.
Posted by Bookshelf Blogs at 8:31 AM