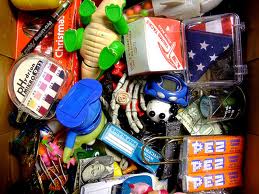 My last major move five years ago had me putting my "must keep forever's" into storage. What I remembered being about four boxes ended up being twelve, and man, was I happy my ride had a truck. Getting home and slowly unpacking these time capsules alone with some wine was one of the funnest/ funniest things I've done in a while. I kept saying to myself, "Why the hell did I keep this?!" as I unwrapped hideous tchotchkes and trinkets, as well as a full collection of old birthday cards from thirteen onwards, old blankets, volleyball jerseys, backpacks, and a full piggy bank. My perma-grin continued well into the night as squeals of laughter poured out of me, especially when two boxes of high school love letters were found (I re-read them and then blue-bagged them).

The heaviest box, which I assumed was books, ended up being a massive VHS collection, with old tapes thrown in as well.

Why did I keep these things around? It's funny to imagine myself packing them in the first place, gingerly wrapping all those ugly tchotchkes in blankets: "I will for sure want this later in life." "Definitely going on my mantle wherever I am." Nope.

Around this time on the news there was a story of a man found buried under his belongings out in B.C. As someone who has never watched the show Hoarders, I thought, how bad could it be? Well, it took the fire department hours to cut tunnels into the home to find him.
It also made me think about why we keep the things we do and what exactly is the opposite of hoarding? After a few searches many different terms came up: fear of stuff, fear of untidiness, and then Obsessive Compulsive Spartanism, which the site WiseGeek.com described in this way:


Many people enjoy sifting through old items in the attic, garage or basement and having a yard sale to earn a little extra cash. Discarding old possessions can often create a sense of satisfaction. People who habitually throw things out, totally opposite of hoarding, bring a new definition to the term neat freak. Obsessive-compulsive spartanism describes a syndrome in which people feel compelled to rid themselves of belongings.

It could just be I like different tchotchkes and trinkets now, to tell you the truth. But after all my purging and donating, I have one small box and a handful of books. Tag 'em and bag 'em.


Bookshelf Home
Bookstore Page
Posted by Bookshelf Blogs at 5:38 AM