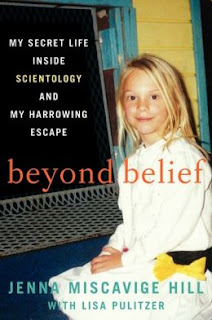 Beyond Belief: My Secret Life Inside Scientology and My Harrowing Escape
Jenna Miscavige Hill

You might think that acronyms like MEST and Out 2D are the latest in texting communication. But if you are a Scientologist you know that MEST means "matter, energy, space, time" and Out 2D refers to someone who has had an affair. If you are at all critical of the church you are deemed an SP, or suppressive person. Very bad. This was the label given to Nicole Kidman when she separated from Tom Cruise. SPs are so evil that their family and friends are mandated to have nothing to do with them.

Jenna Miscavige Hill’s recent expose of Scientology, Beyond Belief, couldn’t have a better title. If even a quarter of what she relates is true, you will find yourself wondering how this organization could possibly have tax-exempt status in the U.S. and why it hasn’t been investigated for child abuse, kidnapping, and fraud. The Church is so litigious that recently Random House of Canada decided not to distribute one of their authors who has just published his own book on Scientology called Going Clear.  They know how to control and instill fear. 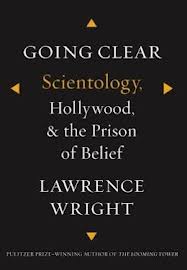 Jenna is third-generation Scientology. Her parents were part of Sea Org, which as far as I can tell is the clergy. They had her before they rose up the ranks, as Sea Orgers are not supposed to have children. They were often separated, having been assigned different tasks around the world. Jenna was left to live in a camp in California with other children of Sea Orgers. She saw her parents once a year. Her day consisted of early rising, followed by manual labour in the morning and studying in the afternoon--seven days a week. These kids studied the hallucinatory and copious works of L. Ron Hubbard, or LRH, as everyone called him. It sounds as close to brain washing as I can imagine.

The media has loved Beyond Belief (see, for instance, this Globe and Mail article). That’s because Jenna is the niece of David Miscavige, the leader of Scientology. He is the eminence grise behind her many horrifying attempts to leave the church. The story would definitely make a great Hollywood blockbuster. Perhaps Paul Haggis could direct it. But it will also get you thinking about religion, democracy, control, child rearing, and what is fair in this crazy, polarized, materialistic world that we all live in. "Going clear" is the highest realm in Scientology. When in his song "Famous Blue Raincoat" Leonard Cohen asked, "Did you ever go clear?" I had no idea what he was talking about. Now I do.


By the way, non-Scientologists are called wogs. That’s a derogatory and I suppose in some way a racist term. The Globe and Mail reported this weekend that the newest church opened this Saturday in Cambridge! See also this article in the Cambridge Times.


Bookshelf Home
Bookstore Page
Posted by Bookshelf Blogs at 6:24 AM