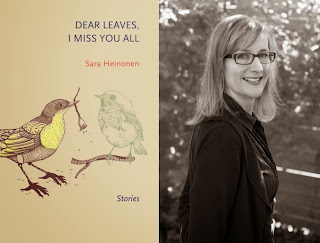 From the back of the book: "Sara Heinonen's first book of stories is populated with characters forced to confront unusual circumstances and hostile environments. When disappointment or disaster loom, they look to nature for solace, but sometimes nature itself is the threat. This is fiction that is fascinated with the moments when life gets both stranger and more beautiful."

Sara Heinonen's stories have been published in literary journals such as The Fiddlehead, Grain, Event, and Taddle Creek. She lives in Toronto where she writes fiction and works as a landscape architect. She'll be reading in the eBar Saturday Nov 2 at 7:30 pm along with Sean Johnston and Stacey May Fowles.

Sara Heinonen Yes, it's entirely nuts. It's bananas as well. Me having a book, finally, after ten years of applying myself to fiction writing, covers most of the food groups. It's that amazing. The book is so absolutely new I haven't yet held it in my hands. But the experience of selecting which stories to include and whipping them into shape with my editor Stuart Ross and publisher Denis De Klerck was certainly a rigorous and challenging experience so I'm really pleased.

BS Is there a through line to the collection, either intentionally or accidentally?

SH The stories are pretty diverse in setting and character and tone. I was playing around and experimenting with my writing through the years and this is the result. I attempted a guinea pig theme and then I tried an everyone-is-heartbroken theme but my editor would have none of it. So, it's a grab bag. There are, however, four stories floating within the book that follow a character named Barb and her family through each season in a seemingly apocalyptic year. She's a neurotic environmentalist on the alert for signs of collapse. It's all a bit wry, or so I intended. And I did manage to sneak a Chinchilla named Gandhi into one of those stories.

BS At some point, every writer of short stories has to answer for the form (no one ever seems to ask a novelist, "Why the novel?"), so this is your turn: Sara, why the short story?

SH I was hacking my way through a novel at one point and took a short story course with Michael Winter and because of that I began reading Canadian short story writers and really liking the aesthetic range and potential of the form. I realized that this very distilled way of telling a story is also really tough to get right. Liking a challenge, I felt determined to try and was soon smitten. Writing short fiction is a great way to work on the craft of writing without the same enormous time commitment and complexity of a novel. Though the truth is that a short story is complex and can take a ridiculously long time and an appalling number of drafts to get right, at least in my case.

It's been said countless times but I'll say it again: the short story is the perfect form for these time-crunched times. So get with the program, readers of novels! I must disclose, however, that I am currently hacking my way through the writing of a novel.

BS There's this surreality almost to your stories, but going back and reading them with this in mind it strikes me that the characters themselves aren't unrealistically wacky, and the writing isn't bonkers or anything, but there's a way that the individuality of your characters meets the individuality of the prose that births a kind of oddness. Can you speak to an "outlook" or an "approach" to your writing? Or, What makes a Sara Heinonen story a Sara Heinonen story?

SH What I do is hide the surrealism in the spaces between the words where nobody thinks to look and by the end of the story they have seeped through the whole thing. Maybe it's also that the devilish oddness is in the details? Maybe defining a Sara Heinonen story would take a novel-length answer? I'll leave that fine and difficult question to whistle mysteriously in the wind through the branches of the trees around Guelph.
Posted by Bookshelf Blogs at 11:00 AM