Q&A with Stacey May Fowles 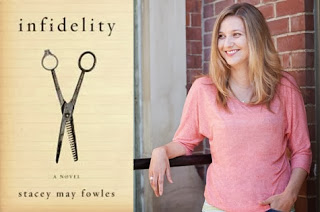 From the back of the book: "Ronnie is a hairdresser with a history of recklessness, stifled by the predictable, comfortable life laid out before her with her live-in boyfriend. Charlie is an anxiety-ridden award-winning writer, burdened by his literary success and familial responsibility, including a bread-winning wife and a child with autism. When the unlikely pair meets, a filmic affair begins on office desks and in Toronto hotel rooms, creating a false reality that offers solace in its secrets."

Since the release of her first book, Be Good, in 2007, Stacey May Fowles has contributed a distinct and sure voice to the Can Lit conversation. Fear of Fighting came next, illustrated by Marlena Zuber. Her writing has graced The Walrus, Maisonneuve, Quill & Quire, Taddle Creek, Hazlitt, and PRISM International, and has been anthologized in Nobody Passes: Rejecting the Rules of Gender and Conformity, Yes Means Yes, and Finding the Words. Recently, she co-edited the anthology She's Shameless: Women Write About Growing Up, Rocking Out, and Fighting Back. She is a regular contributor to the National Post books section, and currently works at The Walrus.

Stacey will be reading from Infidelity along with Sean Johnston and Sara Heinonen in the eBar on Saturday November 2nd at 7:30om.

The Bookshelf  The infidelity within Infidelity could be seen as being driven by Ronnie and Charles' attempts to be faithful to themselves--their own happiness, their own wants and needs. Was this understanding with you at the writing's outset, did it come up during, or am I way off here?

Stacey May Fowles My big secret shame when it comes to writing is that a have absolutely no idea what I’m doing with a story when I start. I just write and a narrative—hopefully a good one—develops out of it. I have no real plan, or outline, or goal. I certainly never have any idea how it’s going to end.

I do know that when I started Infidelity I was thinking a lot about exactly what you describe, so it makes sense that the story would organically try to answer those questions. I think it’s terribly hard for so many of us to balance the needs of others with the commitments we have to ourselves, and often we end up sacrificing ourselves completely, becoming trapped in other people’s expectations, or swinging the complete opposite way into the realm of betrayal.

BS Emily Schultz called your first novel, Be Good, "essential reading for women in their 20s," can you conceive of an essentiality with Infidelity? For that matter--and I'm sorry if this is too huge to ask as an add on--do you think that fiction--you know, the emotional hijinks of made up people--still has to power to effect people's thoughts and actions in their real lives?

SMF Oh, of course it does. You see people having really personal, very emotional reactions to literature all the time—especially when they see themselves represented in the text. Great writing never loses its impact, and its ability to shape our lives.

I would like to think that Infidelity looks at the less talked about problems we have with prescribed roles and relationships. I think many of us find it difficult, or are afraid to articulate that we don’t want the lives that are expected of us, and I hope that readers will find some solace in characters that share that discomfort.

BS Writing non-fiction for places like The National Post and The Walrus, you, when the piece calls for it, have not shied away from using your own experiences. Has it been a problem that readers of your fiction try to read yourself in the story. If so or if not, do you even give a care about stuff like that?

SMF I’ve never really encountered a reader who has done that. I’ve certainly had friends and family who have winkingly ask me about certain scenes, feelings or details, but nothing incredibly overt. I wouldn’t say that I use my own personal experiences in my fiction, but I do collect up real life moments and weave them into a story. Usually they’re just tiny things that felt too meaningful to let go of, things that needed to find their way into a book.

BS I don't think it's at all hyperbolic to say that you rank high amongst this up-and-coming generation of Canadian writers. Do you have any notion of what Canadian Literature will look like as you and yours grow into greater prominence?

SMF I think it’s hyperbolic, but thank you. There are certainly lots of exciting things happening in Canadian Literature right now if you know where to look. The work that organizations like CWILA (Ed. Canadian Women in the Literary Arts) are doing to bring writing generally overlooked by the mainstream into the spotlight is certainly doing its part in innovating the canon. My hope is that Can Lit will slowly break out of its stereotypical narrative and cover much more ground, and I think that’s happening already. We’re starting to respect lesser-told stories as valid ones, and that can mean nothing but good things for writers and readers alike.
Posted by Bookshelf Blogs at 7:13 AM