Lloyd Robertson
The Kind of Life It's Been 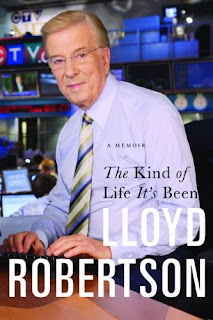 Never in my wildest dreams would I have thought that I would be interviewing a man that I had spent many nights with (on TV, that is). But there he was: Lloyd Robertson—a very hardworking journalist who, with aplomb and grace, has explained to millions of Canadians the tragedies, intrigues, tensions, and sometimes joys of each day for over forty years—talking to me in our makeshift studio at the back of the bookstore.

Lloyd had been invited to speak to the Guelph Men’s Club that morning. There must have been at least 300 men in attendance, and it was obvious that there was a great deal of interest and respect. I had sat outside the room (as, genetically, I was unable to qualify for membership) personing the book table. Later, I had the pleasure of having lunch at Ox with club execs George Hughes and Mark Waldron, and Lloyd. The conversation rambled over senate reform, free trade, the now-defunct but wonderful farm report on CBC noon that gave us the daily price of beef on the hoof, the impact of the twenty-four-hour news fix, and a whole lot more.

Lloyd’s book The Kind of Life It’s Been is surprisingly well written and, needless to say, endlessly fascinating. I really shouldn’t have been surprised at the quality of writing because, after all, he worked daily for all of those years crafting words that would express the complexity and novelty of what was happening in the world every day. And the fascination arises because he has so many stories—not only about major events, but also about what really happened behind the scenes at CBC and CTV.

I hope that you enjoy the chat that I had with Lloyd, which is available on our YouTube channel. He is particularly candid about his early life and his mother, who suffered from a variety of mental illnesses her whole life. During the day I saw many acts of kindness as he spoke to men at The Guelph Men’s Club, to customers who had come to The Bookshelf to have their book signed, and to a Guelph journalist whose story you might have read in the Tribune. It’s fitting that the word kind is in his title because truly, he is.

Here is a sample of our conversation. To view more, see the playlist on our YouTube Channel.


Bookshelf Home
Bookstore Page
Posted by Bookshelf Blogs at 9:52 AM