The Joy and Pain of Literary Obsessions 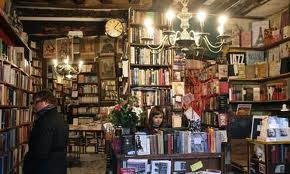 There's no greater thrill for me than finding a new writer. It's comparable maybe to the thrill a fly must feel once it's found the chink in a window screen after days of dumb bumbling.

I go a bit nuts. Once I find him or her, I glut myself on that author. And I'm a completist limned with obsessive tendencies. So I don't rest, and am bothered even, until I've got all there is to get of that particular author. Kerouac was the first. As a teen, I'd poke into Macondo and Sunrise here in Guelph a few times a week, hoping that some yellowed paperback had been left there for me since the last time. Looking at my order history here at the Bookshelf, I even see that the first book I ever ordered into this place was The Town and The City. That was way back in June 2001. Vonnegut was next and, Jesus, did I ever binge. Come university it was Italo Calvino and Jorge Luis Borges, and likewise I obsessively skulked through the Anglo shops in Montreal hoping to find T Zero or Six Problems for Don Isidro Parodi. Post-university, I had to have everything by Flannery O'Connor and Lorrie Moore.

For about fifteen years I had been propelled by this behavior until finally my author lust was mostly slaked. Which is to say, as far as authors and their books went, I wasn't really desirous of much. In the past few years there've been a cadre of stunning writers and their works, but nothing absolute, compelling, or, for lack of a better term, quest-worthy.

For sure there's a comfort to obsession. It's nice to walk into a place with a directive. The flip side of this, for me at least, is the sallow waywardness that comes once I've got everything there is to get. And I find myself nostalgic about the time before I had any given corpus. I still find myself moping to the Ms to see whether that store has Like Life, or to the Cs to see if they have Six Memos for the New Millennium, and maybe to the Os, just to pick up the copy of Everything That Rises Must Converge to thumb through. It's a maudlin feeling I get, having already found what I was looking for. And so follows an aimless span where I drag my feet through bookstores, trying to get excited, being a weirdo, and double-checking whether books I already own are there or not, trying to—jeez—recreate that thrill.

In preparation for the The Big Lebowski screening in our cinema, I decided I'd have a look at Raymond Chandler's The Big Sleep, upon which I'd heard the Coens had loosely based their movie. The connections are diaphanous, but they're there. Chandler's been hailed much by writers I admire (and had been compulsive about), such as Michael Chabon and Jonathan Lethem, but I'd never given Chandler a shot. That was two weeks ago, and I'm now about four novels in. The rest are on the way. And while I'm reeling with this fresh discovery, I can't ignore the certainty that, in time, I'll have read everything Chandler left, and again find myself leering at the mystery section, just to double check that they've got The Little Sister on the shelf.

Posted by Bookshelf Blogs at 6:19 AM