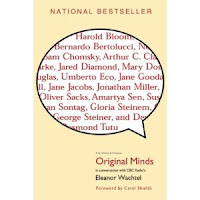 Eleanor Wachtel is the ruby in the crown of the CBC. Let’s hope that someone in the corporation realizes this. Week after week she does superb interviews with the most interesting writers in the world. She is so obviously prepared and interested that these weekly chats seem relaxed and fun. It’s almost as if she and her guest are sitting in a café table next to us and we are allowed to eavesdrop.


As I have listened to her for years, I know her voice well. It is warm and almost edgeless, but her brain is directed and lit up. So when I found myself sitting next to her at our book table at the Guelph Lecture, the body joined the voice. She was of course charming and friendly, and she asked me "What was the best book you've read all year?" Or perhaps she might have asked "What are you reading?" because at that point I became a little flummoxed. Eleanor Wachtel was asking me a question! It took my brain scan a while to come up with this answer: Arcadia, by Lauren Groff. She actually wrote it down and thanked me.

Last week I was rambling around on the Internet and read an article on the Washington Post site called "The 10 Best Books of the Year." How satisfying to see Arcadia sitting on that list, described as poignant and gorgeously written. I immediately emailed Eleanor at the CBC. She wrote back and said that she would check it out. I’ll be listening to her future shows as attentively as ever and will be really thrilled if Lauren Groff ever shows up to chat.

Posted by Bookshelf Blogs at 7:49 AM