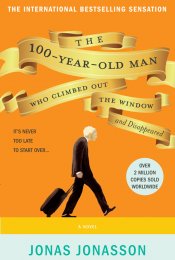 I am always on the hunt for a funny book. Smart, black-humoured, and outrageous is actually really difficult to find. In my last post I mentioned that I was taking Jonas Jonasson's latest sensation home, thinking that it looked promising. And I was right! Having lunch with a couple of my colleagues, I tried to impart how funny this romp was, and discovered it is a hard book to synopsize without people looking at you like you're bonkers. Jonasson uses the long arm of a 100-year-old man, Allan Karlsson, to have a little fun reinterpreting the twentieth century, backroom style.

I attempted to illustrate the hilarity with a couple of key episodes:

Allan's father, who is a generous man to his family but mostly angry at the rest of the world, decides in the early 1900s to pursue his belief in socialism and so leaves Sweden to catch up with the Bolsheviks in Russia. It isn't too long before socialism loses a bit of its shine for him, and under the influence of another gentleman, he decides that the Czar isn't such a bad guy and retires from political activism. He buys a bit of land to grow Swedish berries just around the time that Lenin nationalizes the land. Furious, Allan's father puts a fence around his property and declares his land independent. It doesn't take long for the Bolsheviks to come around, bump him off, and go off on their peaceful way. (Come on, that's terrible, and very funny.)

Allan's subsequent complete disinterest in politics or religion helps him to stay slick as he finds himself a close confidante of General Franco, Harry Truman, Jiang Qing, Stalin, etc....

My favorite part of the book was when Allan is chatting with Mao during the Korean War and confides that he doesn't want to be anywhere near communism. Where, in Mao's wisdom, does he think Allan should go? Cuba is recommended as somewhere with beaches; that would surely be immune. (Hahahaha)

You see what I mean. It is a hard book to flog, but so well done. I encourage anyone who enjoys history, humour, and fiction to buy this book.


Bookshelf Home
Bookstore Page
Posted by Bookshelf Blogs at 9:19 AM