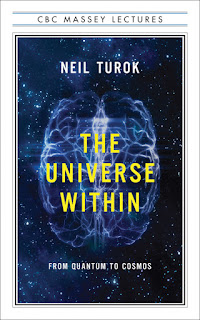 Perhaps the thickest wall between contemporary popular science writers and their audience is the essentially unimaginable nature of modern physics. A century ago, a physics teacher could use pool tables, wheelbarrows, and spinning buckets to illustrate the forces underlying the universe. And for most of what happens in life, those examples still suffice. But anybody seeking to explain or understand the universe in contemporary terms is going to have to toss all those comfortingly concrete objects in the trash. And what examples could a contemporary writer use to illustrate the fact that space itself curves, that there is a universal equation whose result is the Greek letter psi, which represents “every possible state of the world,” or that the cosmos might consist of one-dimensional string-like universes moving within a ten-dimensional space? The untrained mind reaches out, vainly trying to lay its archaic map of the universe over this alien landscape, and slumps back, befuddled and defeated, thinking only “here be dragons.”

The 1970s saw a raft of best-selling books popularizing the “new” physics, which had already been around for a generation. Books like The Dancing Wu-Li Masters and the Tao of Physics (both of which I read and loved) related science to Eastern spiritualism, generating huge sales numbers that were in direct proportion to the wince-rate of the physicists who read them (the sleeper film What the Bleep Do We Know? continues this tradition). Physicists like Steven Weinberg and Stephen Hawking wrote back, attempting to bridge the gap between scientists and the public without stretching the science, and Neil Turok’s The Universe Within: From Quantum to Cosmos, a book based on Turok’s 2012 Massey Lecture series, continues in this noble tradition. And as the Director of Waterloo’s Perimeter Institute, a former chair of Mathematical Physics at Cambridge, and a colleague of Stephen Hawking, Turok has the chops to accurately capture the world of modern physics.

But here’s the thing. If you read fantasy literature, you’ll know that the motif of the one “true” language—the language that includes the real names for everything and allows one to know and control the relationships between all things—is ubiquitous. In a sense this language does exist, but unlike the pidgin-Latin of Harry Potter or the ancient language in Eragon, it requires more than just knowing words, and it’s devilishly intimidating for the lay-person. The language is mathematics, and without math, there’s no way to really grasp the bizarre world of quantum physics. What Turok does, though, is open the door for us a crack so that we understand enough to feel a sense of wonder about just how strange the atomic and cosmic foundations of our everyday world are, and how remarkable it is that there are minds subtle and large enough to grasp them.

Turok, like Moses or George Mallory, climbs with you for awhile and then pulls ahead into the misty heights above. Fortunately, like Moses (and unlike Mallory), Turok comes down from the mountain with the tablets from on high, etched in a language we can understand, even if we don’t get to see things face-to-face. And along with his presentations of the perplexing constructions of modern physics, he also gives us an often moving picture of the people who struggled, sometimes against considerable adversity, to advance the field, from historical figures like Maxwell and Faraday, to neglected scientists like Emmy Noether (who worked without pay as a professor at Gottingen University because she was a woman), to the adventurous African students who travel to attend the African Institute for Mathematical Science that Turok co-founded in a derelict hotel in South Africa with the goal of making “the next Einstein an African.” We also get snippets of Turok’s own background as well, so the oddities of relativistic and quantum physics are presented within a personal context. For the lay reader, it’s this human element that grounds the more esoteric ideas in the book and makes them less alienating. It certainly helps that Turok is an infallibly cheerful and accommodating travelling companion.

The Universe Within offers a glimpse into the mysteries of the cosmos that might just inspire you to follow up Turok’s recommended reading list or pore through the hilarious and addictive minutephysics videos produced by his student, Henry Reich (Got only one minute to learn what a Higgs Boson is? No problem!). In five lectures, Neil Turok can only plant a seed, but the more we know, the more we want to know, and so his book might just be the beginning of a mind-expanding journey.

Posted by Bookshelf Blogs at 9:30 AM