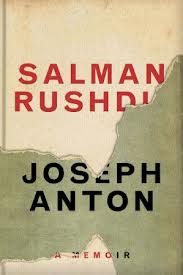 So, I developed a bit of a crush reading Joseph Anton, Salman Rushdie's memoir. Decidedly, it is a bit of a strange read because it is written in the third person (Joseph Anton was Rushdie's alias while he was in hiding during the fatwa), and it is so vivid with specific details that it almost seems shaken out of his diary, but I loved it. You meet a man with a poet's heart who loves language and inquiry, a man who has been married four times and honors the love and intimacy of each woman, and seems driven to conjure each relationship as it was in the context of the time, without imbuing it retrospectively with the difficult emotions that followed. Rushdie reveals himself as someone who has a rich, analytical mind and believes strongly in informed debate and creative exploration. He has a great sense of humor, and describes himself pacing in mismatched sweatsuit, told to stay quiet--lest he incite more hatred for continuing to be alive--as he drafts letters he can never send to his detractors in the media.

Although Rushdie claims he holds no resentment toward those that abandoned, defamed, betrayed, or tried to murder him, citing the burden as being too heavy, Joseph Anton is rather full of de-masking and finger pointing. You can almost feel the steam being released as the ink hits the page. The book also gives Rushdie room to thank his incredible circle of friends and fellow writers for keeping the discussion going and supporting him well while he was in exile. Doug and Barb Minett of The Bookshelf were two of those people during the fatwa years.

When, he wanted to know, did it become irrational to dislike religion, any religion, even to dislike it vehemently? When did reason get redescribed as unreason? When were the fairy stories of the superstitious placed above criticism, beyond satire? A religion was not a race. It was an idea, and ideas stood (or fell) because they were strong enough (or too weak) to withstand criticism, not because they were shielded from it. Strong ideas welcomed dissent. "He that wrestles with us strengthens our nerves and sharpen our skill," wrote Edmund Burke. "Our antagonist is our helper." Only the weak and the authoritarian turned away from their opponents and called them names and sometimes wished to do them harm. (345)

A cool tidbit: the satanic verses are actually a controversial set of lines allegedly removed from the Quran, wherein the Prophet, peace be upon him, presumably seeking tolerance and acceptance for the followers of Islam, temporarily claimed that it would be OK for people to also revere the local, preexisting Gods alongside Allah, but soon after he retracted it. The Prophet always emphasized that he was a messenger of God, not divine, and that was the very interesting vulnerability Rushdie wished to explore. Cue the assassination plots....

- Hannah
Posted by Bookshelf Blogs at 9:53 AM