Water water everywhere, but not too good to drink! 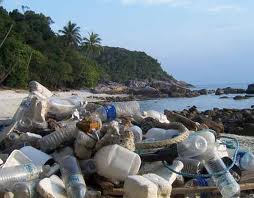 Here's the back story. The City of Guelph and the Wellington Water Watchers had organized a documentary series about water. One of the films to be shown was called Tapped and was basically an expose of bottled water companies, starring the conglomerate which taps into our own water table, Nestlé. Nestlé's John Challinor didn't like this and felt that Nestlé should be able to present their own propaganda. He wrote a letter to the city complaining. The city cancelled the movie. This made many people angry, particularly the Wellington Water Watchers, the Council of Canadians and the Central Student's Association. And this is how on Monday evening over 500 agitated and passionate citizens gathered in War Memorial Hall to actually see the movie and listen to Council of Canadians chair and water warrior Maude Barlow.

The movie was incredibly disturbing. There are two issues. Large companies which use water swipe it for almost nothing, while ordinary citizens pay a fair amount for water usage. But it's the evil production of the villain plastic which compromises the ocean, threatens the entire food web, and wreaks havoc with our bodies. There are masses of plastic bottles the size of Texas floating in the ocean. Plastic particles are poison pills for anything that lives in water. Beaches of the future are not going to be comprised of coral and limestone, but ground-up pieces of plastic.

Maude Barlow, who was an advisor to the UN on water, warned about all of the sneaky international treaties constantly being created. She is an international heroine and it is always such a pleasure to hear her speak. She's been at it a long time and must be getting tired. But as she said, "What else could I be doing that is more important?" We can only hope that she continues her dogged activism. Her books Blue Gold and Blue Covenant will give you insight into what is probably the most important issue of the future. 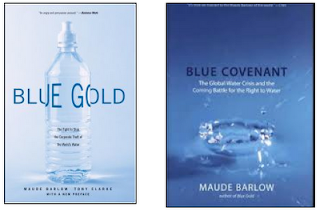 Posted by Bookshelf Blogs at 5:36 AM